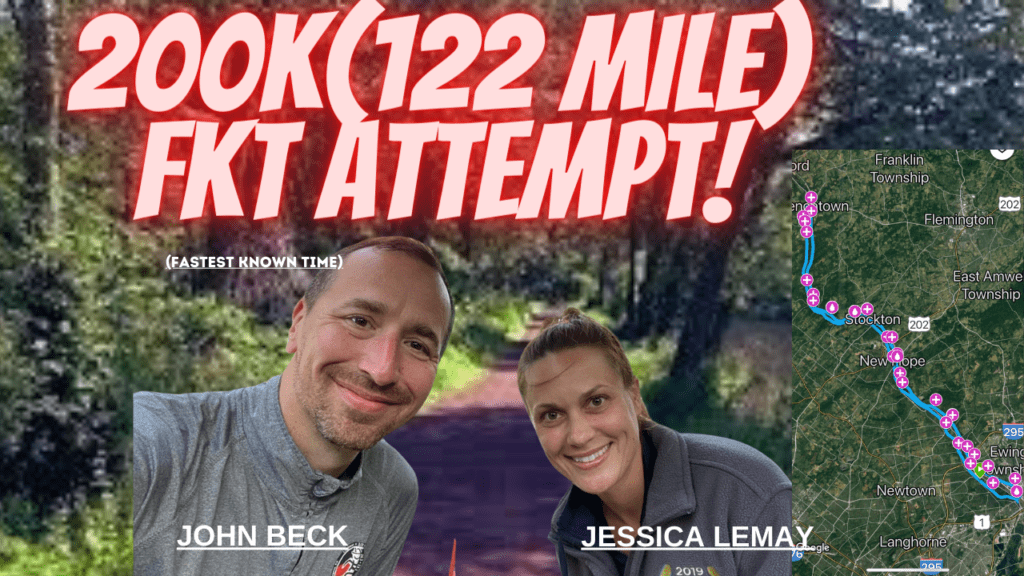 These two are amazing individuals and are doing this not only for the FKT but also to raise money for our “Runners for Miracles” campaign. This was part of our vision when I created this year long campaign to raise $100k for Mia’s Miracles. I wanted to inspire others to do some awesome, crazy, bad ass shit and raise money for a great cause at the same time. Thank you both for believing in our vision to help others facing challenging circumstances and we wish you the best of luck!

Jessica is a little crazy and is always up to do things that most people would think are bonkers. John is much more reserved and loves adventure as long as it can be done from home in front of his TV.   Together they’re going to attempt a feat that no known person has done before… and they’re going to do it twice!   The route that they plan on running takes place on the historic Delaware & Raritan Canal path in New Jersey and the historic Delaware Canal towpath in Pennsylvania. The canals and their towpaths were originally constructed in the 1830’s and a portion of this route on the New Jersey side is a former rail line constructed in the 1850’s. The route is a single 61 mile loop consisting of 5 smaller loops (the popular Delaware River Loop Trails). It is connected by the 1931 Uhlerstown–Frenchtown Bridge on the Northern portion of the loop and the 1884 Calhoun Street Bridge on the Southern portion of the loop. The Calhoun Street Bridge is the oldest river crossing between Pennsylvania and New Jersey.   John frequently runs the Delaware River Loop Trails and a few months ago bicycled the entire 61 mile loop on his single speed cruiser with hopes of some day to do it on all on foot. Jessica lives on the canal and once she heard about John’s goal of doing it all on foot she peer pressured him into doing it at the peak of a hot and humid summer.   The website Fastest Known Time tells us that no one has ever attempted the 61 mile Delaware River canal loop. To really solidify their achievement, Jessica wants do it TWICE!

That’s 122 miles along the Delaware River from Trenton to Frenchtown with dozens of beautiful river towns in between. They will be starting on the towpath in Yardley in the late afternoon/early evening of Wednesday July 28th. They will be going clockwise on the loop by heading North along the Pennsylvania side and crossing into New Jersey at Frenchtown. A map is being finalized with locations where their friends can meet them along the route and provide support/pacing/etc. If you can’t make it to the river they’re hoping to provide a Garmin LiveTrack where you can cheer from afar.   They’re excited (and terrified) to attempt something no one has ever done before. Thank you for all of your support.

HELP us hit our goal of $100k by donating NOW!
Click Here
Scroll to Top